When I came to town in the 70’s I made friends with the Texas Troubadours, and hung out with them a lot. The lineup then was Lynn Owsley on steel guitar, Pete Mitchell on guitar, Junior Pruneda on bass, Don Mills on drums and Wayne Hammond fronting the show. When I went to the clubs in Printer’s Alley with one of them I got in for free, and we had some fun jamming at the Den and other clubs on Broadway and I got all access when they did the Midnight Jamboree

Ernest was doing some sessions at Pete’s Place and I got to tag along. Pretty friggin’ awesome watching Ernest Tubb record, I’ll tell ya. He had Owen Bradley, whom he called Moon, on piano, and Pete produced the sessions. The whole studio was engulfed in a cigarette smoke haze, but the Ol’ Man didn’t smoke. He’d quit years ago, on the advice of his doctor. His bass player at the time, Pete’s brother, Jack, ignored the medical advice and smoked himself to death.

Pete was one fine guy, laid back and self-deprecating, who took the time to talk to me and pass along some old anecdotes and he even let me in the booth to listen to playbacks and watch him work.


Wayne had a session coming up, and I somehow got on it. Lynn was busy or out of town or something, so I got to do a real Nashville session with the Texas Troubadours at Pete’s Place, the birthplace of so many hit records.

Pete told me that if I could come up with something good that he’d never heard before he’d use me on some more sessions. But I was like, damn, I’ve only been playing four or five years, WTF am I gonna come up with? Hell, I couldn’t even get a steel guitar in tune back then. But I really appreciated his good will. Very encouraging for a new guy in town, especially when a lot of big time Nashville pickers weren’t quite so accommodating… to put it mildly.

Pete told me he couldn’t even play a song all the way through anymore. He said all he could play now was intros and turnarounds. Funny. He was a good guy. He has a new website here. Stop by. Lots of good stuff.

Pete’s Sho~Bud, on display at the Ernest Tubb Record Shop on Broadway. 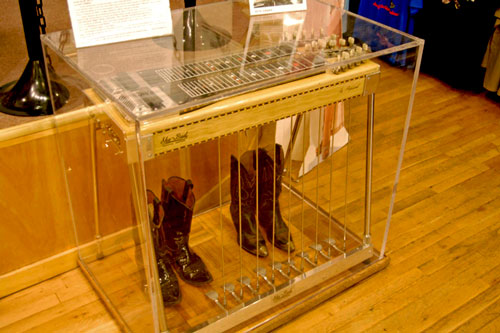