It was in Indianapolis that I heard my first live steel guitar player, and that would be Joe Tippie, who played a Marlen at a club called, I think, Nashville North. 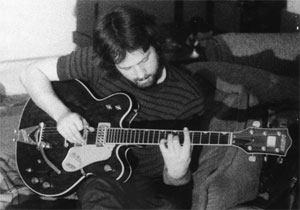 I went to college in Indianapolis, at an art school, from 1968-1972. The students – and some of the teachers – had long hair and did a doobie now and then, and so did I, but I was the only one who had any appreciation for country music, except for the guy who drove the lunch wagon that came around the school every day. He always had country music playing on his radio whilst he sniggered at the hippies milling around buying junk food, and I remember hearing a Conway Twitty song one time.

It was in Indianapolis that I heard my first live steel guitar player, and that would be Joe Tippie, who played a Marlen at a club called, I think, Nashville North. They were playing “The Other Woman” the first time I walked in the door. Abso-fucking-lutely staggering! A real in-person steel guitar player, after I had only seen ‘ em on TV, guys like Hal Rugg, Don Helms and Don Warden. I mean, I was ga-ga.

There was a club called the Sherman Bar, or some such, that had a jam session on Saturday afternoons, and I would usually show up and play a little guitar. This was before I ever had a steel guitar. It was my first experience ever playing live country music with a band; heretofore I had been a rock’n’roll guitar player in my high school band. Let me tell you, I was pretty fucking brave, walking into a red-neck bar at that time with hair down to my shoulders, weighing only 150 pounds, but I just wanted to pick, and I never had any more trouble than I could handle, even though I was considered kind of weird. The chicks with the big hair would point at me and say, “Honey, you might be kinda cute if you’d get a haircut.”

Norm Whitmer was the bandleader at the Sherman, and Joe Jackson was the guitar player, and he was very kind to me. He’d show me guitar licks and explain stuff about music, and one time when the drummer was in jail for back support he hired me to play drums, even though I didn’t play drums until then.

The local country station, WIRE, played some great music back then. I nearly drove my car off 16th St. one afternoon when Johnny Bush came on singing “I’ll Be There” and Dickey took his solo. Wow! What was I doing in Indy-fucking-apolis? I should be in Nashville. Well, I would be in a few years.

I was at a “pot party” one night. “Pot Party” was what straights back then called a bunch of hippies getting together. Like their frame of reference was a “Cocktail Party”, I guess. Anyhoo, I sat on the floor in front of the record player for a long time listening to “Don’t Bogart that Joint” over and over on the “Easy Rider” soundtrack. Red Rhodes, I think. I’d never heard steel guitar in any other context than stone country, so that seemed to be the nexus of country music and my preferred life style, and I staggered home that night feeling a little better about things. I knew I’d have me a steel guitar some day.