June of 1995 was the date for our first ever Texas Troubadour Reunion to be held in Nashville, Tn. 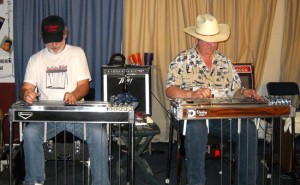 June of 1995 was the date for our first ever Texas Troubadour Reunion to be held in Nashville, Tn. We were excited to be getting together again and even more excited to play together again. We were honored to have many big stars sitting in our audience. We even returned to the Grand Ole Opry on Porter Waggoner’s segment and performed two songs, getting a standing ovation along the way. It was quite a large time for the Texas Troubadours!

The mayors of Hendersonville,Tn, Nashville, Tn and Fort Worth, Tx had made proclamations, the Governor of Tennessee had Made it Texas Troubadour Day in Tennessee. Even Congress declared something, and sent the appropriate papers with all the purdy state seals, shiny things, and blue ribbons.

The assistant for Gov. Bush explained to me, “The Governor feels that it would be inappropriate to make a declaration for Texas Troubadour Day in Texas while you are actually having your big affair and reunion in Tennessee.” And he went on with, “If you ever have a reunion in Texas, just call and we will make the declaration without hesitation.”

I then told the assistant, “Mr. Barnett, you have hurt my feelings and you will make all the Texas Troubadours, who are Sons Of Texas, feel rejected!” Then I began to educate Mr. Barnett, saying that the states of Texas and Tennessee have been sister states since 1836. In music we shared Ernest Tubb, Willie Nelson, Ray Price, Jim Reeves, Charlie Walker, Claude Gray and Billy Walker – the list goes on and on – we have shared a great musical legacy.

In another century we shared great statesmen and fighters – Davy Crockett, Sam Houston, William Barrett Travis, Jim Bowie… As a matter of fact, the state of Tennessee is known worldwide as the ” Volunteer State”. This name comes from the volunteers who went from Tennessee to Texas to help fight a war. All of them at the Alamo perished while fighting for a Texas cause: Freedom.

“Now, Mr. Barnett, if the Texans in 1836 had asked for help from Tennessee, and the Tennesseans said,”If ya’ll would have your war up here in Tennessee we might be willing to help. But we feel that it is inappropriate for us to come down there to Texas to fight. If you ever fight another war and do it here in Tennessee, then we won’t hesitate to declare something and help ya’ll out!”

Mr. Barnett said, “Thank you for the lesson, Mr. Owsley, now how do you want this proclamation to read?”

And I asked him to just include a bunch of “where as’s” and some “heretofore’s” and, oh yeah, don’t forget to include a couple of “be it known’s” and maybe add one of the ever popular “Honorable’s.” If it sounds purdy then it is purdy.

Only in the Life of a Texas Troubadour…