Lower Broadway in downtown Nashville degenerated into a somewhat hazardous part of town after the Opry moved from the Ryman to Opryland in 1974, and by the 80’s it was eat up with peep shows, winos, druggies and other interesting characters, and you were more likely to hear really loud blues than a country shuffle, which helped make Gabe’s, north of downtown off Trinity Lane, such a popular spot for pickers to go and jam.

Roy Acuff even owned some of the buildings down there, but it’s doubtful that he knew what kinds of businesses were in them. Bye’n’bye, Nashville decided to “revitalize” the area, and started a clean-up. Might have had something to do with The Gaylord Entertainment Company wanting to turn Nashville from a music town into a sports town, or so it was rumored.

The National Life and Accident Insurance Company, who had operated the Opry since 1925 and WSM radio since 1923, was taken over in the 80‘s by American General, but they had no real interest in steel guitars and theme parks, and they sold everything to Gaylord in 1982. 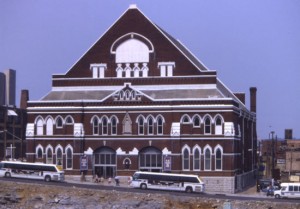 A convention center was built across the street from the Ryman at 5th and Broad, where peep shows used to be and where this photo was shot before construction began, when Broadway was in its decline, with the back of the building facing Broadway. After the revitalization the building was ”turned around” so the front faced Broadway. Funny. 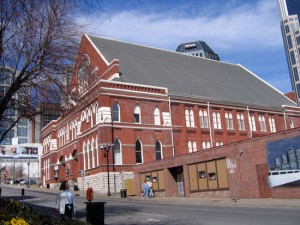 Here’s a recent shot of the Mother Church. Broadway is safer than it used to be, if you don’t count harassment by the cops for double parking for 20 seconds to unload a steel guitar into a club, and it’s packed with tourists and drunken Vandy kids most nights, but it’s not a hot spot for jam sessions as it was when the Opry was just across the alley from Tootsie’s. 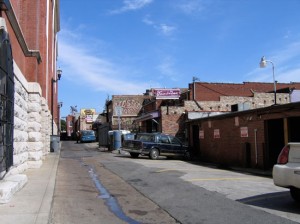