when you’re playing a club or a little beer joint your pay might come from anyone – the bartender, the club owner, the chick singer, the bandleader.

If you play big time gigs, like “The Tonight Show” or the Opry or union sessions or with an artist who has, or ever had, some hits you probably get paid with a check, and you might even have direct deposit. But when you’re playing a club or a little beer joint you typically get paid in cash, and it might come from anyone – the bartender, the club owner, the chick singer, the bandleader. And then there’s the tip jar to consider – who divvies that up? A night of beer drinking isn’t conducive to accurate math, and sometimes – God forbid – the drummer might get more than you.

I get asked about once a year by whoever paid me how much I got as I’m about to drive off. Then there’s a band meeting in the parking lot and it’s Show and Tell – everybody has to dig out their pay and count it and see if someone got shorted. If you put your pay in your wallet you might have a hard time proving just how much you got. Which is why I always put mine in an empty pocket, separate from all the Ben Franklins in my wallet, so I, and everyone else, can see just what I got.

So what you want to do is come up with a wicked cool signature lick and play it couple times and lay back the rest of the time. 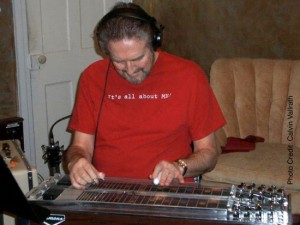 Actually, it’s not all about you unless you’re:
1. A featured instrumentalist at a steel guitar show or similar function.
2. Recording your own album.
3. The World’s Foremost Steel Guitarist and half the people at the show are there to see you back up Johnny Bush or Darrell McCall.

Little Jimmy Dickens taught me how to play steel guitar when I went to work for him in the late 70’s. He told me to watch him like a hawk, and to follow him no matter what happened, because sometimes the song would come to a fork, due to any number of vagaries or unforeseen developments, and if it did I should probably take it. He also mentioned something about not playing over his vocals. Realizing full well that Buddy Emmons had the gig a few years before I did, I was all anxious to to impress him and everyone else with my fancy licks, but as it turned out, “Raisin’ the Dickens” was my chance to show off, not “Another Bridge To Burn”.

As a steel guitar player your main job is to make the singer and the song sound good. You’re not there to show everyone how many 16th notes you can cram into a bar.

This concept is pretty important when you’re doing a session, if you want to keep on doing sessions, though not so much these days as it used to be when everyone recorded together, live. These days so many tracks are phoned in that much of the spontaneity is lost and you get ProTooled at the producer’s discretion and some of your hottest licks may end up in the trash.

Weldon Myrick played some amazing stuff on “I’ll Come Running”, and it most assuredly helped make the song the giant hit that it was, but he didn’t get in the way of Connie’s vocals. Buddy and Jimmy Day played some of the most soulful and tasteful steel guitar intros, turnarounds and fills in the history of recorded music, but they never got in Ray’s way.

So what you want to do is come up with a wicked cool signature lick and play it couple times and lay back for the rest of the song.

If you’ve got an artist gig you’re there to make the singer and the song sound good. (Where have you heard that before?) You should also probably look the part of a successful musician who’s part of the big show, and not stagger out on stage disheveled or drunk… Well, that part may be negotiable these days, what with casual Fridays and all. Torn jeans might be part of the band uniform with some artists. But, hey, remember how impressive the Texas Troubadours and the Buckaroos looked on stage?

Buddy Charleton and Leon Rhodes could scare every musician in the place when it was their turn to do so on “Red Top” or “Honey Fingers”, but when then Ol’ Man stepped up to the mike they became sidemen again.

I saw Buddy backing up Van Howard at the Midnight Jamboree and, man, I don’t know if was planned ahead of time or what, but you could barely notice Buddy unless you were listening for him, and believe me, I was. It was the most tasteful, minimalist performance I’d ever heard. But it was perfect. Well, not perfect for me, because I wanted to hear something astounding, but as far as the overall show was presented – it was perfect. Apparently what Van wanted.

When I went to work for Faron Young in 1980 playing steel guitar he was a little unhappy with the job I was doing, and I didn’t know why, but after a few late night beers with the band on the bus I figured it out. I was playing too much. Yeah, I could play a few hot licks, but they weren’t necessary most of the time. What he wanted was melody lines, even though he didn’t realize it – he just sensed, in that amazing intuitive way that stars have – that something was wrong, but couldn’t put his finger on it, so I started playing the melody and he kept me in Crown Royal for 10 years.

Doing little bars gigs, you’ve got more room for experimenting with your latest licks and just dazzling some other possibly disoriented musician who might have wandered in from Robert’s or Weehawken or somewhere. Overplaying can be fun and even enlightening, at times, especially when you’ve been playing the same 20 songs with some artist for the last 10 years. Faron was fond of mentioning that Doug Jernigan quit him because he got tired of playing “Hello Walls” and “Wine Me Up” every night.

But it still might not be all about you, dang it, at least not for most of the night, although the last set can be an Emmons of a different color sometimes. The singer might have his eye on a hot chick, and if you make her wet her panties with your soulful rendition of “Last Date” it might take too much attention away from him. I guess you could let him sing a verse – Conway sang it in “F” after Papa John started it off rather spectacularly in “C”.

Hal Rugg walked in the door at Legend’s one afternoon when I was finishing up the last set with my band du jour. He was in the next band, and started setting up his steel guitar on the floor a few feet away from me. I played the intro to “Don’t Come Home A-Drinkin’” and grinned at him, and he just grinned back. Did I impress him? Not hardly, and I wasn’t trying to, but it was just a way of letting him know that he was one of my idols and that I’d paid attention to his great work over the years. Maybe the guy from Weehawken would be impressed, I don’t know. Every time Weldon walks into a club where I’m playing I do the “Once A Day” intro, and he still gets up and sings with us. It’s all in fun, and if you can’t have fun you might as well be a drummer. (Drum roll, cymbal crash…)

If you want to impress someone, impress yourself. Play a lick better than you did the night before, come up with something you never played before, lock in with the fiddle player, get the best tone you can. There’s more, but you get my drift. It’s not really all about you.