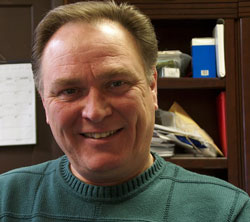 Sometimes when you’re out on the road you see more of friends that live a few neighborhoods away in Nashville than you do at home. I was in Kansas playing a club with WC Edgar and in walked Jack Cotton. He’d been driving past in a bus and saw our name on the marquee. Ha. Jack’s from my part of the world, NE Indiana, Hammond in his case and South Bend in mine, and he’s been in Nashville since 1980 or so. And he’s a Cubs fan, which is a good thing. I used to go to Jack’s house and watch the Super Bowl, and you could watch any Super Bowl you wanted because he’s got them all taped.

Jack’s a fine singer and bass player who’s worked with Eddy Raven, Dottie West, Sammy Kershaw and the famous “many others”, like I have. He sent me a great email:

“Hey Cal, love to read your stories. I just read the one about the ‘Fans’, good stuff. I’ll share one with you if don’t mind. We were in Kansas for a one nighter with Eddy Raven and one of the young guys in the local opening band was trying to start up a conversation after the show and asked, ‘So do you guys work with Eddy all the time? Or does he have a regular band?’ I couldn’t help it, I had to laugh out loud in his face.”

So there ya go, that’s the kind of respect we road pickers get sometimes.

Most people at a live music event don’t know what a steel guitar is, and a lot of people couldn’t even identify the bass player in a lineup if he shot somebody and the police were holding them as a witness 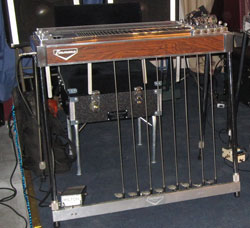 Once upon a time there was a band that billed themselves as a country band. They played a bunch of good ol’ country songs and had a chick singer and OK vocals and a pretty good guitar player, but they didn’t have a steel guitar in the band. Or a fiddle, for that matter. Now, how ya gonna do Tammy Wynette or Ray Price like that? Well, you can’t, not really.

This band was fairly popular and had quite a following, but they sounded pretty lame to me and I didn’t enjoy listening to them. Kinda like that time when one of the speakers went out in my car stereo.

Most people at a live music event don’t know what a steel guitar is, and a lot of people couldn’t even identify the bass player in a lineup if he shot somebody and the police were holding them as a witness. Singers get most of the attention. But however musically unsophisticated an audience may be, wouldn’t you think a smattering of them could tell something was terribly wrong if there were no steel guitar in “Apartment No. 9”?

I get a compliment every once in a great while from a non-musician, and it’s always a surprise when someone seems to know what I’m up to on the stage. A nice surprise, and always unexpected, as surprises often are. Sometimes they just want to know somebody in the band and they pick on me for some reason, even if they think I’m the keyboard player, but if they buy me a beer, so much the better.

I’d like to think that most people – even though they can’t actually identify the sound or sight of a steel guitar – still recognize it somewhere in their subconscious as an integral part of, say, “Together Again” or “D-I-V-O-R-C-E” while they’re dancing and if it weren’t there they would get a nagging feeling that something was wrong and become disoriented and maybe two-step on their partner’s instep.

Everything just goes better with a steel guitar.

I got some of the best advice I’d ever gotten from some older players: “Son, you need to play 6 nights a week.” 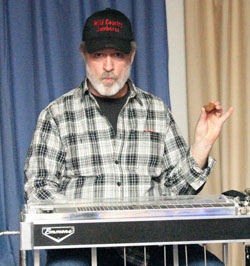 When I was new to steel guitar, trying to learn as much and as fast as I could, I got some of the best advice I’d ever gotten, from some older players: “Son, you need to play 6 nights a week.” Yep, that’s real good for your chops, and you learn a whole lot about intros, turnarounds and faking your way through songs you don’t really know. There’s nothing better than experience. But the initial problem is that you have to reach a certain level of competence before you’re so much in demand that you can get that many gigs, and that necessitates squirreling yourself away in your room, practicing like crazy until you make some significant progress. But once you’re there, you’re there, and playing 6 nights a week will help you realize whatever potential you might possess.

So you cruise along, for years maybe, playing all the time, getting better and better – as long as you don’t start to burn out – which can happen, just ask me.

Bye and bye you might turn into such a monster player that you find yourself the darling of the producers on Music Row, on their A list, and spending your days, and half your nights, in studios. But when you’re doing a lot of sessions you spend most of your time listening to playbacks, drinking coffee, discussing your golf game and networking. You’re not actually playing very much, certainly not enough to keep your chops up, and the same thing can happen with an artist gig, where you’re playing the same old stuff every night and your chops go to shit.

I’ve seen guys like Paul Franklin, John Hughey and Hal Rugg working clubs around Nashville for peanuts, but they just wanted to get out and play, even if cartage cost more than the gig paid. Years ago you might find Buddy Emmons or Jimmy Day at some club on Broadway or in Printers Alley jamming like crazy, but it just ain’t like that anymore.

Is the current crop of hot session players just not into that anymore? And, if so, why not? Well, back in the day a lot of hit records featured some pretty outstanding steel guitar – songs like “Touch My Heart”, “Night Life”, “Together Again”, “I’ll Come Running”, and a lot more. But what have you got on the radio today? A lot steel guitar pads, mostly, and a lot of generic-sounding playing mixed way in the background underneath the guitars and other oddments that somehow make their way onto “country” sessions these days. Nothing much in the way of inspired playing that would grab you by the balls and cause you run your car off the road or make you want to run out and buy a steel guitar.

So, anyway – and I now find myself in this position because I spend more time writing HTML than I do playing hot licks – the problem is how to keep your chops up if you don’t play all the time like you did when you were young and driven and getting so good. Yeah, you can sit around at home and practice scales and finger exercises for hours at a time (like you did when you were starting out, and had the fire) but when there’s not a whole lot of inspiration left, and not very many clubs to play, and just a modicum of steel guitar on the radio it’s hard to muster the enthusiasm to really get anything accomplished. Like, if you get your chops up to where they were when you were in your prime, where you gonna use ‘em? Probably not on an artist gig or on any sessions. There don’t seem to be very many gigs left where you can play real good steel guitar stuff, and jam sessions that don’t feature an endless queu of vocalists that only let you play a turnaround are real hard to find. Well, there’s steel guitar shows, maybe the last refuge of guys that just want to play, but the structure and the cliques may be a trifle off-putting to newcomers – but, damn, real live jam sessions on Broadway in the 60’s and 70’s could be more intimidating than that anyway.

So, if you like to to play steel guitar and you find that you can’t quite play like you used to, it may not be arthritis or Old-Timer’s disease – it might actually be something that’s totally not your fault, like the fact that the world has changed a lot since Ray Price recorded “The Other Woman”.