Skip to content Skip to main menu
Home › 2011 › November
Steve Jobs, the late CEO at Apple, was a visionary and a super salesman and he developed Apple into a company that had more freaking’ money than the US government. He could be an asshole or a nice guy. He wasn’t noted for his people skills, and he would sometimes tell an Apple employee that his project was “shit”. He was more interested in results than massaging someone’s ego. That’s why we have the iPod, the iPad, the iPhone, and so many other really cool tech things that we wouldn’t have ever thought we needed until Apple came out with them.

What Steve meant by “shit” was that he thought the engineer/designer could do it better, more like what he had in mind when he envisioned a ground-breaking product like, say, the iPhone. And the guy, thinking that it was technologically impossible, would usually come up with something that was better, surpassing his perceived limitations, just what Steve wanted.

How could Steve get away with treating Apple employees like this? Why didn’t they tell him to fuck off and go somewhere else? Hell, with Apple on their resume they could probably get another gig anywhere.

They stayed because they were good people, “A people” as Steve liked to think of them, and “A people” know they’re good and that Steve’s observation wasn’t a reflection on their talent or ability, just an incentive, however crass, that could motivate them to come up with something truly awesome. “A people” don’t need to be stroked, was what he was thinking, I guess.

Some musicians are inordinately sensitive about the least little criticism of their playing. I’ve seen them pack up their shit and stalk out in the middle of a gig because somebody said they were too loud or too busy or whatever. These guys aren’t “A people”. What they are is guys who are just insecure about their playing.

Really good musicians, “A musicians”, don’t get all offended and pouty when a band leader or a producer or an artist wants them to play something different than what they had in mind. They know how good they are, and that they can play something else that’s gonna be great.

Frank Sinatra didn’t slaver all over his musicians, going on about how great they were. He had the best guys in the business backing him up, and he might introduce them on stage, which was just the professional thing to do, but they didn’t need to be stroked, because they were pro’s. They knew it and he knew it.

Everyone likes a compliment, but if you’re an “A musician” you shouldn’t need your ego stroked all the time, you should just do your job.

I first met Weldon on the Opry stage when I was working with Stonewall Jackson back in the 70’s when I first came to town. He strolled over and flicked a finger across the strings on my black P/P, like he does to all guitars, I guess, and listened to it to see if it “sang”. Some time later I took that guitar out to his house and he removed the dual-coil pickups and installed single-coils in it. I still have that guitar; it’s right here next to me as I type. And it still sings. Weldon sings, too, BTW, in case you didn’t know. Here he is at the Midnight Jamboree, and below are some photos of his new Justice steel guitar, and I’m sure it sings, too. Click on images for the large versions. 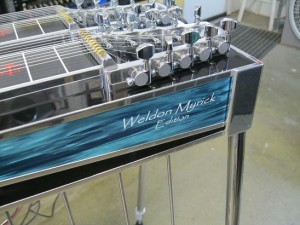 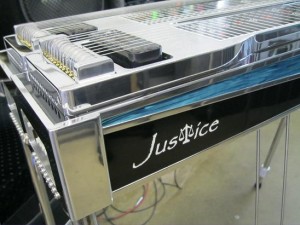 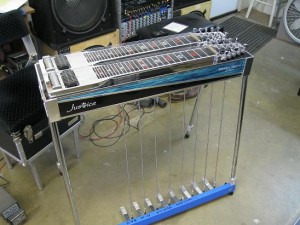 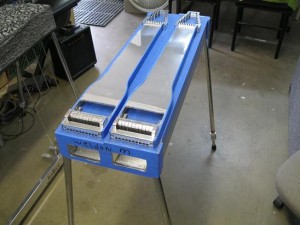 Here’s where you get this stuff, according to Buddy Emmons, by way of Mike Cass. The important thing here is to not confuse volume with sustain – you get sustain from your left hand, not from your right foot.
A novel concept, you may be thinking? Well, push your volume pedal all the way down, take your foot off it and just play for a while and try it out.

I worked with a guitar player who sang great, but didn’t really know how to play guitar. He couldn’t play the intro to “Mama Tried”, “Workin’ Man Blues”, “Satin Sheets’… and the list goes on. He’d tune before the first set and never even look at his tuner the rest of the night. He had 4 or 5 licks and played them in every song. He was a lazy bastard.

Good country drummers are hard to come by. Country drumming can be kinda boring, but, damn, if you’re hired for the gig and getting paid, please try to play something appropriate, if you possibly can. One drummer I worked with, who sang one song, didn’t know the ending on “Neon Moon”, where there’s this little thing that cues the band. He never did learn it. I put a picture of Buddy Harman on his snare one night and he went around asking everyone who it was.

Bass players – holy shit, some of em’ think they’re lead players, especially if they play with a pick. Have they ever really listened to what the bass is doing on “The Other Woman” or “Swinging’ Doors”? Bass players almost always sing.

I worked with a piano player who would show up 5 minutes before the downbeat and then complain about the PA during the 1st set, and how his mike was set. Duh, he coulda got there a little sooner in time for a sound check. He liked to play between songs, too, just diddling around, while someone was announcing the next song or a birthday on the mike. He also made faces when someone hit a bad note, and complained between songs about the drummer and the bass player – the audience could see and hear all this. This was a guy who’d worked a lot of big time gigs, and I don’t get how he could be so unprofessional. He did know the piano parts on our set list, so he at least had that going for him.

Many years ago a singer got up and called “Night Life” and introduced me as this great steel guitar player who was going to kick it off. Well, I didn’t know it. My excuse was that I’d only been playing a couple of years and I couldn’t know every damn intro yet. But I learned it as quick as I could, actually from a guitar player, Lonnie Atkinson, who got it from Jimmy Day. It was the only thing Lonnie knew on steel guitar.

If I’m on a gig and the band does a song I don’t know I’ll learn it when I get home and be ready the next time. I’m not gonna get caught again. I don’t know how some of these guys can go for years in public without learning their parts. Seems like they would be embarrassed or something. But I guess not. I guess they’re just fucking slugs.

I don’t sing, because I can’t, but maybe if I did I’d be able to get away with this kind of unprofessional shit, too, although I wouldn’t want to.