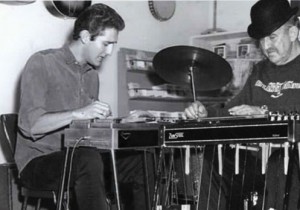 I haven’t heard this term since the last time I talked to Buddy Emmons, but it used to go on a lot around Nashville. It was when 2 or more steel guitar players would set up facing each other in one of the clubs on Lower Broad or at the old Sho~Bud store or at Gabe’s or myriad other places and try to outplay each other, and it was something. It was awesome, it was how everybody got so freakin’ good. If it still goes on I wish someone would clue me in, because I haven’t seen or participated in this kind of activity in a long time, and my chop needs honing.

So, what’s the old guy need all those knee levers for, anyway?

I was out West with Faron Young, going through the mountains, and the bus was overheating. The thin air at high altitudes can be hell on vehicles, especially big ones like buses. The bus had an automatic cut-off that would shut the engine off when it thought it was getting hot, like “Hello Walls” was in 1961. But the engine wasn’t really all that hot, not in danger of welding itself together, yet. There was an override button on the dash, so we all took turns holding that button down to keep the engine running, hoping to make it over these damn mountains, mainly because we were running low on beer. Doesn’t seem like much of a deal until you try it, but after a few minutes your finger would cramp up and your arm would get numb and you would start to hallucinate and you’d think you’d never play guitar again and you would curse the day when you got on your first music bus. So, it was a job getting over those mountains, but not as bad as the Donner Party had it, I guess. Eventually we did have to pull over and let the engine cool off a little, like Faron’s career did about the time I came on the band, and I scurried up the hill a took a picture. 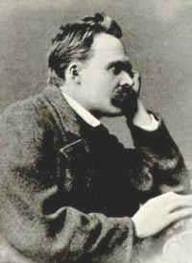 Here at Steel Guitar Insanity we’re pretty excited about Friedrich Nietzsche’s birthday coming up Saturday. He was born in 1844, which would make him, um, really old, and he went insane, too. He had some interest in music and was a big fan of Richard Wagner. He did opium and wrote some real deep – incomprehensible, some might say – shit that was suppressed for a long time because of supposed ties with the Nazis. So we’re gonna drink some Doppelbock and eat some German Chocolate cake, or something like that. Below are some excerpts from his writings, with some frivolous addenda, imagining him to be a steel guitar player.

“In heaven, all the interesting people are missing.”
Buddy’s not there. What about Day and Chalker?

“The individual has always had to struggle to keep from being overwhelmed by the tribe. If you try it, you will be lonely often, and sometimes frightened. But no price is too high to pay for the privilege of owning yourself.”
Maybe he was thinking about Uni players.

“When you stare into the abyss the abyss stares back at you.”
And don’t blink. You can be the Overman.

“I would believe only in a God that knows how to dance.”
Surely not a line dance.

“To predict the behavior of ordinary people in advance, you only have to assume that they will always try to escape a disagreeable situation with the smallest possible expenditure of intelligence.”
So, when you’re stuck with an overbearing fiddle player sitting in, just call “Steelin’ the Blues”, in C#.

“Talking much about oneself can also be a means to conceal oneself.”
Buddy’s pretty closed lipped most of the time. “Really?’ he says when he feels loquacious.

“Be careful when you fight the monsters, lest you become one.”
Well, Buddy and Jimmy used to lock horns quite a bit. And they both turned into monsters.

“A casual stroll through the lunatic asylum shows that faith does not prove anything.”
Yeah, take a stroll down Music Row.

“Insanity in individuals is something rare – but in groups, parties, nations and epochs, it is the rule.”
Could he have imagined what the CMA has become?

“Art is the proper task of life. ”
There ya go, until you start getting a few session accounts, then art falls by the wayside.

“All things are subject to interpretation. Whichever interpretation prevails at a given time is a function of power and not truth.”
Like some singers who want to tell the band how to play. I’ve seen them move a mike stand 6 inches just to assert their power.

“The thought of suicide is a great consolation: by means of it one gets through many a dark night.”
Or many a dark road trip.

“Without music, life would be a mistake.”
There you have it, from one of history’s preeminent philosophers.

I’m sitting in the Holiday Inn restaurant in Austin scarfing down escargot with the guitar player. We’d just finished up at Willie’s 4th of July picnic with Faron. The guitar player and I had accounted for at least a case and a half of that good ol’ Lone Star beer, of which there was a big-ass tub backstage, iced down to perfection. Two Rays were at the next table, Price and Benson. When we left we told the server to put it on Ray’s bill. No problem. We still owe a Ray some snails. Imagine that, an array of snails!

Which reminds me of the only snail joke I know.

There was this snail who got a new car, and he had a big red “S” emblazoned on the driver’s door. He was showing off, squeaking his tires, speeding past his snail friends, and one of them, obviously impressed, ejaculated, “Look at that S-car go!”

I played a Thanksgiving benefit at the Salvation Army in Nashville with Faron’s band a few times. Various pickers and artists would drop by to entertain, all for free. One year we had Carl Ballou and Bill Monroe. Carl didn’t have a band, so we backed him up. Wow, that guy had a powerful voice; he didn’t even need a mike. Bill only brought his fiddle player, Kenny Baker, maybe, so the Deputies backed him up, too. I didn’t have a dobro with me, and knowing what a hard-core grasser Monroe was, I didn’t figure he’d want an electric steel guitar whining in his ear so I laid out. After his performance he shook my hand and thanked me, and I’m thinking, damn, he thought I’d been picking with him? Or… maybe he was thanking me for not picking with him. Heh, I hadn’t considered that until just now.