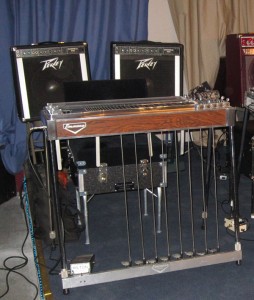 This is my 1974 rosewood Emmons P/P. I’ve owned it for about 8 years or so, and I always called it Rosie, but now it has a new name. Mike Cass borrowed it a couple weeks ago to do a gig with Ray Price, so now it’s the Ray Price Guitar.

I was a Cherokee Cowboy in 1980 for a weekend, as a sub, but I don’t remember what guitar I used. Mike, who’s a real good Emmons mechanic, was kind enough to change a couple knee levers around, so it would be the same as my black Emmons, before he returned it to me. And he even put new strings on it. Well, those strings had been on there for over a year, and he needed to sound good with The Chief, right? I know he sounded great; Mike plays his ass off. He has a site here. 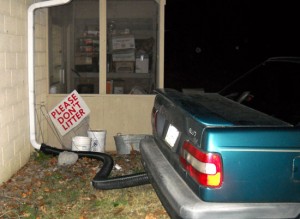 It can get boring on break on some gigs. Well, you can hook up the piano player’s exhaust to the club’s drainpipe for laughs.

If you’re tired of country music that’s not country any more, you should sign the CMA Petition. Dave Burley writes: “Murder On Music Row now Murder At The CMA(Country Music Assn). Steve Moore, CEO of the CMA, is doing a good job of murdering our beloved country and bluegrass music. Under his watch he has changed the name of the Fan Fair to the Music Festival.”

httpv://www.youtube.com/watch?v=XPvXNlQYJz4
This was at the Kansas State Fair some years ago with WC Edgar. The guitar is a P/P Emmons that was made out of mahogany especially for Bobbe Seymour, who was trying to get a warm jazz sound, like a Gibson Byrdland guitar. Mahogany is soft, though, and some of the parts underneath began to pull up and I had to drill a few new holes and relocate them. Worked fine. I got it from Dan Tyack and played it for 20 years or so and then sold it to Bobbe, who then completely re-did it and sold it for a pretty penny.

I was in Faron Young’s office in the Young Executive Building on Division St. chatting with him about our upcoming weeklong tour across Texas. He had his feet up on the desk and was puffing on a cigarette, expostulating on the evils of record producers and booking agents. Marty Robbins passed by in the hall and stuck his head in and said hey to us. The latest issue of “Country Music Magazine” lay on Faron’s desk. I had an article in it called “Cold Hamburgers, Warm Beer and Hot Licks”, which could be construed as slightly less than complimentary regarding country music artists. I don’t know if he’d read it, but I’d used a pen name, so I figured I was safe from retaliation.

That article was received with some small smattering of acclaim from CMM and a couple other publications which also printed it, so I thought to myself, hell, why don’t I just write a whole damn book? I knew I could do it. Didn’t I get an “A” on that composition about my salamander collection in 8th grade?

The book finally emerged from my computer as “The Beast From the Back of the Bus”, and you can read more about it on my writer site. It’s a mystery/suspense story set in the country music world, with the “fictional” Hank Barnett as a singer who gets murdered by a crazy loon from Texas. Below is an excerpt, wherein steel guitar player Will Copley learns of his boss’s death.

Will Copley was sitting at his steel guitar in his living room practicing a lick he’d heard a steel player play the previous night at a Nashville nightclub where he’d gone to jam. He knew it was on a Roger Miller song, and he’d gotten the record out and played it when he’d come home last night. He’d gone to bed at 4:30, and dreamed about the lick. He played the lick over and over. It involved three fingers, in a kind of a banjo-type roll that he’d never done before. He wondered how many times he would have to play it before he could hit it flawlessly. Five hundred times? A thousand? More than that? What if he never got it?
Then the phone rang, and it was Randy Austin [the bandleader] asking him if he’d heard the news. He hadn’t, and Austin had the pleasure of being the first to tell him that his boss was dead. There was a small possibility that the band could still work at least some of the dates Barnett had coming up, if they could get another singer to fill in. One who didn’t have his own band. Austin would be going down to the office that afternoon to see what he could do and he’d call him back as soon as he found anything out.
Will sat numbly at his steel guitar, rubbing his finger picks together. Damn, his first artist gig, and the sonofabitch goes and gets himself murdered. Just his damn luck. What was he supposed to do now, file for unemployment?
He worked on the lick some more, until his hand ached, and then went to the kitchen and got a Coke out of the fridge and slumped in front of the TV and searched the channels for “Andy Griffith.”

You can read some more excerpts from this fascinating tome here. OK, it’s not a tome, it’s an ebook, but if you like murder mysteries and have ever wondered what it’s like out there on the road with a Nashville artist you might find it engrossing. You don’t have to have a Kindle or an iPod to read it; you can read it on a computer.

I was in Branson with Faron working two shows a day at the Cristy Lane Theater. The theater wasn’t on Cristy Lane, as you might suspect; it was on W. Hwy. 70 and it was just a tad boring doing the same show to the same (seemingly) people – over 65, retired, bespectacled, complacent and on permanent vacation – twice a day, every day, all day long. But it was easy work, no traveling or moving equipment between shows like you did working a string on one-nighters.

So we would go to see other acts between shows when we could, which didn’t always work out since most of the shows ran concurrently, like life sentences, and when we were just getting done with our big extravaganza most of the other shows were, too. But we caught most of Loretta Lynn’s show one time.

The great Jimmy Crawford was playing steel guitar with her at the time, so that was pretty cool, getting to see him. But Loretta did one of the most unprofessional things I’ve ever seen a performer do on this particular show. And she had no valid excuse, either, like being drunk or buzzed on coke. As far as we knew, anyway.

“When the Tingle Becomes A Chill” was the song, and at the end there’s this big steel guitar thing that Hal, I guess, did on the record, and Jimmy fluffed it. The show came to a screeching halt and Loretta glared at him and made some uncomplimentary remark and made him play it again, all by himself. All eyes and ears were on him, and being the classy guy he was, he executed it flawlessly and just grinned. And sweated. WTF? Like she’d never forgotten the lyrics to “You Ain’t Woman Enough”? Or come in a beat too late, like she did on the Wilburn show one time and blamed Buddy Spicher for throwing her off? Huh.

Oh yeah, lest I forget, here’s an old Nashville joke:
How do you know when there’s a chick singer knocking at your hotel door?
She forgot her key and doesn’t know when to come in.