I was stranded in a hotel room with Oprah once.

One of the terrors of working the road is being trapped at a hotel, airport or a truck stop with nothing to do. This was in the days before iPods and Kindles. I was coming back from Montana with Jimmy Dickens once and it started to snow around St. Louis and by the time we got to Evansville we were in a freakin’ blizzard and the roads were closed and we had to while away a day and a night at a truck stop. I’ve spent hours loitering around airports waiting for delayed flights; wouldn’t be quite so bad if the drinks in airport lounges weren’t so expensive. And speaking of airports, the hour I spent in a plane full of screaming kids on a runway at O’Hare waiting to take off could give a lesser man claustrophobia and anxiety attacks. Arnold had an easy flight in “Kindergarten Cop” compared to that one.

I was stranded in a hotel room with Oprah once. It was a cold, rainy day and the hotel had few or no amenities and the TV had only two channels, red and green. There was nothing nearby to walk to, and a cab wasn’t in the budget so I scanned the channels. Didn’t take long. Just by dumb luck I found the Oprah Winfrey Show, the first time I’d seen it. She had a guest who claimed to have seen Elvis at a Burger King, and Oprah was halfway ga-ga over her story. Huh, so this is the famous Oprah that girls had been telling me about? It was a long afternoon. I happened to see her again a few years later when she had Paul McCartney on. I had seen Paul interviewed by David Frost a few weeks earlier and Oprah, who was apparently still suffering from Beatlemania, (a stagehand had to come out and wipe up the drool in front of her chair during a commercial break) didn’t quite pull off the incisive interview that Frost had conducted.

So now she’s down to her last show. It’s no shine off my bar, but all you steel guitarists of the gentler sex persuasion out there should now have more practice time, what with the upcoming lacuna in your afternoons.

When I was on the road with Stonewall Jackson I used to while away the long travel hours in my bunk reading music theory books. 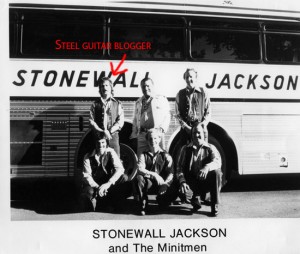 When I was on the road with Stonewall Jackson I used to pass the time on long road trips in my bunk reading music theory books. To play “B. J. the D. J.” and “Me And You And A Dog Named Boo.” Huh.

I was fortunate enough to be involved in a rehearsal band with some primo pickers back in the 70’s.

I was fortunate enough to be involved in a rehearsal band with some primo pickers back in the 70’s. We got together at Johnny Cox’s house once a week and just jammed and played a bunch of real cool stuff. Roy Melton and Eddie Canaday were on guitars and Paul Cook was the drummer. Johnny played bass, and we had Weldon, Jimmy Crawford and me (!) on steel. Buddy even stopped by one memorable night; that was the night we were still going at 7am the next morning. He had to be coaxed a little, but he finally sat down at my steel guitar, after ascertaining that I did have a D on the first string on the C6th neck. I snatched up a spare 6-string and we played “Gonna Build me A Mountain” and a few other favorites. Whew, what a learning experience, playing with these guys!

We decided to work up a show of sorts and play at Cope McDaniel’s steel guitar pull at the Ramada Inn on Trinity Lane during Fan Fair, and one of the things we arranged was a medley of famous intros and it was way cool. We did “A Way To Survive”, “Half A Mind”, “Walk On By”, “Night Life”, “I’ll Come Runnin’” and several others. We were a big success, and I even had to sign an autograph. LOL.

Roy and I were working for Red Sovine at the time and we barely had time to make the bus call after the show.

I got a gig one time because the former steel player had insulted the star’s masculinity by complaining that he did songs in chick keys, like B and F#

I got a gig one time because the former steel player had insulted the star’s masculinity by complaining that he did songs in chick keys, like B and F#.

Loretta recorded “You Ain’t Woman Enough” in G# and “Don’t Come Home A-Drinkin’” in C#, although I’ve seen her on the Wilburn Brothers show do them in A and D. But, yeah, he was right, chicks do do songs in funny keys.

It wasn’t a great gig, just a weekly rehearsal and a few showcases, but it was a gig. I didn’t know what the situation was when I showed up the first time, but I approached it like I did all artist gigs – appearing to be awed by the artist’s talent and trying not to be taller than he was, and it worked out OK for quite a while until he actually did get a record deal, but by then I was done with the road and I quit to be a web designer, so then it was hasta la vista, baby, from C#!