Del Reeves (aka Franklin Delano Reeves) was probably the funniest guy I ever met.

Del Reeves (aka Franklin Delano Reeves) was probably the funniest guy I ever met. He was a natural comedian, and his Little Jimmy Dickens impersonation is one of the most hilarious things you’ll ever see.

When I was with Faron he was on a package show with us and I got to play with him. His steel player, Big Jim Webb, was sick back in Nashville, so I filled in. Del rode back to town on our bus and he had Faron laughing so hard we thought he was going to have a heart attack. It started with a story about how the South lost the Civil War because they had only one cannon ball and had to go retrieve it every time they shot it and went on from there. Faron was all red-faced and shit and rolling on the floor of the bus and couldn’t get his breath.

Del was hell on truck stop waitresses, and would pull little skits on them with the help of some of the pickers who worked for him, George Owens being one of his wittiest confederates. Hell, they were like Abbot and Costello or something, and the bewildered waitress wouldn’t know if she was serving breakfast or double Scotches. Or who was on first. George played bass for Faron after being a Good Time Charlie.

I did a couple short road trips with Del after that, and it was always fun. We played one gig way back in the hills, somewhere near Dayton, TN, where they had the famous Scopes Monkey Trial in the 20’s. Visiting that remote area, I could understand why those folks didn’t understand evolution.

Funny thing about Del, he wouldn’t pay me until a few days after we got back home, and I had to meet him at the Nashville Palace to pick up my check.

Here’s Del on the Opry with Big Jim, whose son, Larry, plays steel guitar, too.
httpv://www.youtube.com/watch?v=m2-vdqnjL2I

I’ve never had much fun playing weddings. In my high school rock band the parents of the happy couples always told us we were too loud. I mean, hell, we were a rock band, not Glenn Miller. That’s why the kids hired us in the first place. What they did they expect?

I played a Jewish wedding with Faron one time, and that was a hoot. Those folks were loaded, and they spent thousands on the affair, which was held in a country club and catered to the hilt. We never figured out why they wanted a country music act, but we scarfed down some Knishes and Blintzes and played our shuffles and ballads to a reserved, polite response. Then Faron decided to wax loquacious between “I Miss You Already” and “Alone With You”, which he usually introduced as his Jewish song, “Alone Wit Jew”. He strolled across the stage telling the audience how he lived on an island in an exclusive neighborhood in Old Hickory, just outside Nashville, between two estates owned by Jews, and how he felt like a Gentile sandwich. The big country show kinda tapered off after that and we were politely ignored the rest of the night.

In my early days in Nashville I made half a living just subbing, when I wasn’t doing a regular gig.

In my early days in Nashville I made almost half a living just subbing, when I wasn’t busy with a regular gig. Guys who had an artist gig and a club gig were always needing a sub when they went out on the road, and sometimes they just needed a sub for one set when they had to go do an Opry spot. It was just a matter of hanging out a lot, sitting in, being available, and having the ability to at least fake your way through every country song in the world.

I had a Sun-Mon gig at a place called Reel Country, and one week I had to go out with Faron and I got Phil Kuntz to sub for me. Well, the band got fired while I was gone, and they even got severance pay, something that doesn’t happen very often in the music business, and Phil got my money. After I’d been doing the gig for several months. Geez!

Another time I subbed on a short road trip with a MOA (Major Opry Act) because his steel player was sick. When we got back to town the DABP (Dumb Ass Bass Player) told me we had a couple Opry spots that weekend, and I should show up to do them. I’m like, isn’t the regular steel player gonna be there? Nah, he said, we want you. I had some misgivings, but I showed up anyway, and the regular steel player was there with his axe. Shit, how awkward. Well, we’ll get you to do one spot and the regular guy to do the other, the DABP said, but the MOA said, hell no, that’s not right. And it wouldn’t have been right, the Opry wouldn’t go for that, so I just hung around the Opry all night and listened to Sonny, Hal and Weldon and learned a couple new licks.

It’s easy to criticize other musicians when you’re sitting at the back of †he club listening to them and drinking a beer with some other picker who may or may not repeat what you said.

It’s easy to criticize other musicians when you’re sitting at the back of †he club listening to them and drinking a beer with some other picker who may or may not repeat what you said. “May” is the keyword here. If he’s got an axe to grind or a gig he wants he may repeat what you said to anyone if it serves his agenda.

When you hear someone playing over the vocals or playing hackneyed licks it’s too easy to be critical, because you know you’d never do that, but it’s usually better to restrain yourself. Pickers talk about you, too. Don’t you wonder what they say? Well, you might just hear it from someone who wants to either tear you down or start a war.

Some guys are mighty sensitive about their playing, and don’t take criticism well, and if word gets back to them that you laughed at some Buddy Emmons lick they tried to play, they might remember it for too long.

Music is like politics, working in an office or being a car salesman – people play other people against each other, but if you exercise a little restraint you can avoid the he-said, she-said, you-said game and come out a Winner, like Bobby Bare and Charlie Sheen.

Damn, I woulda never played that! D’oh! Did I say that out loud? 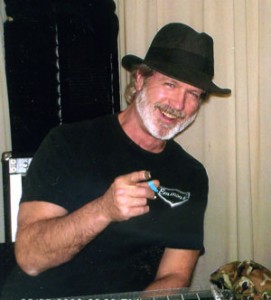 This blog has been up for a year, yesterday. Thanks to you who have read and commented. You know who you are.