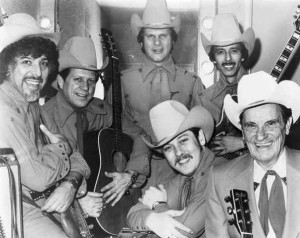 I was in Nashville around 1977 looking for a gig and hanging around with the Texas Troubadours when Lynn Owsley told me Stonewall Jackson might be needing a steel player. Stonewall’s next gig was the Ralph Emery TV Show on Channel 4 the next morning. The show was live at, like, 5am or something, and Lynn said he’s meet me there, introduce me to ‘Wall, and help me get ready for a live TV spot. Wow! What a guy! How many guys would do that, huh?

I was staying at a Day’s Inn off Trinity Lane with a couple other Troubadours, and I stayed up all night, because I knew I could never get up that early.

So, at the WSM TV studio, Lynn, who’d worked for Stonewall before, helped me get set up, gave me an idea of the arrangements for the songs Stonewall was going to do, and watched as I did my best on live TV. Everything went pretty well, I guess, since Stonewall asked me to go out on the next road trip with him. Damn, I was a Nashville steel guitar star! When we got back from that first road trip I did the Opry with him, and I figured my future was assured.

Of course, you have to be in the Musicians’s Union to do TV, and I wasn’t a member, so Lynn took me down to the Union after the show and got me all signed up. Johnny DeGeorge was the guy to see at the time, and as he was looking over my application he mentioned that he’d watched the Emery show that morning. Luckily, he didn’t seem to remember seeing me, which was a good thing, so I got all signed up and was now an Official Nashville Cat, and a Minitman, at that.

As an example, say you’re in the key of G. Pick 4, 6 and 10 at the third fret, no pedals, real hard, and then slide up to the 10th fret and pick 3, 5 and 8 as you press the first two pedals. Now you’ve got another G chord with 6 strings ringing, and with 4, 6 and 10 starting to die. But before they do die, slide back two frets, let off the 1st pedal and lower the E’s, giving you a G7th chord, and then let off the pedals and knee lever and you’ve got a C, or 4, chord. A real fat sound. Pick amongst yourselves and see what else you can come up with.

If you need custom-made, one-of-a-kind covers for your guitar or amp stop by Sharp Covers Nashville and you can get pretty much whatever you want to cover up your stuff.

Follow up to the previous post, to establish a steel guitar connection. Jazz musicians sometimes drift off to the back of the stage and smoke cigarettes when it’s not their turn to play. Doesn’t happen much in country music. Why? Because jazz fans are so much more musically sophisticated than country fans. They come out to hear music, not necessarily to watch a “show”. So, good luck with all that Dorian mode shit you’ve been working on – nobody’s gonna get it. 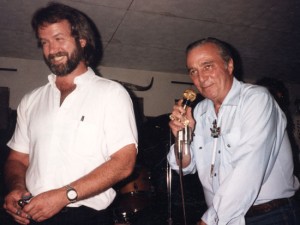 I started work on this suspense novel way back in the 80’s when I was playing steel guitar with Faron Young and had a lot of free time to sit around the bus on long road trips scratching away on a yellow legal pad. It’s just about finished, and I plan to release it as an ebook real soon. It’s a dreary, depressing, revolting – though interesting and fast moving! – tale of a big Nashville star being pursued from Texas to Tennessee by a wild-eyed sociopath with murder in his heart. You can read more about it here if you like this kind of thing.

The weather was bad, not very many people showed up at the gig, but the drummer put a positive slant on it as we were driving back to Nashville. “Yeah, it was a long, boring night, but did you see the legs on those chairs?”

Steel guitar players argue about the “Emmons Tone”, but I’m not always quite sure what they’re talking about – the person or the eponymous steel guitar?

Buddy Emmons gets a monster tone out of any guitar he plays, and it’s quite distinctive, but it’s more than just tone. It’s technique, soul, chops, feeling – or whatever you want to call everything that comprises Buddy’s ability to play better than anyone else, and to sum it up as “tone”.

Buddy’s had a number of tones over the years. It’s beyond the scope of my organizational skills to categorize and analyze his various and sundry tones, but I will say that my favorite Buddy Emmons tone, a Beagle’s ears notwithstanding, is the one he got with the Blade on albums like the “Black Album”, Jones live at Dancetown, Nancy Sinatra’s country album, Roger Miller’s ”Trip In The Country”, and a whole bunch of other recordings from that era, which spanned what, 20-30 years? It’s the definitive steel guitar tone, as far as I’m concerned, but that’s just my personal preference, and it’s what inspires me, as well as so many other players, to play as well as possible, for whatever that’s worth.

OTOH, there’s the tone that an Emmons P/P guitar produces, no matter who plays it. Even a beginner can get a great sound by just picking, say, the 6th string at the third fret and letting it ring. You’ll hear that magic tone. According to Buddy, and other sources, some guitars are better than others, but a discerning ear can hear the quality of a good P/P when the strings are just strummed, even if it’s not plugged into an amp. Buddy’s original inspired design back in the 60‘s made it an incomparable steel guitar, a benchmark by which all guitars have been judged.

This “Emmons tone” isn’t for everyone, of course. Plenty of great players have made their mark playing other brands, with their own distinctive sound, and that’s all well and good. Hell, not everybody likes ’57 Chevies or old Panheads, either. Or Taylor Swift. But you like what you like, and you don’t have to justify or explain your tastes to anyone, even if you somehow feel compelled to do so, because it’s all subjective, and there’s no clarification necessary for something subjective. It’s just you. If you would kill for that Emmons tone, good for you. If an old Bigsby or a Fender 1000 does it for you that’s good, too. We’re all just steel guitar players, and if everyone pursued the same sound the steel guitar world would be constricted to a banal, ho-hum sub-genre of country music.

Faron killed himself 14 years ago today. I use to badger him to get me on “Nashville Now” with him, and he did a couple times. I mean, it wasn’t his call; the show’s budget only allowed for so many musicians, but he did what he could. He was the guest host on this one, so I guess he had a little more bargaining power. This clip, “Stop To Take the Time”, is from the late 80’s. It’s a record he had out on the Step One label. Great song, shoulda been a big hit. More about Faron here.

You hear a lot of bitching these days about how country music ain’t country any more, but if you go back to the early 60’s you might notice that country took a bad turn towards pop at the hands of Chet Atkins, Owen Bradley and Billy Sherrill, who engineered the “Nashville Sound”, replete with string sections, background vocalists and with the steel guitar playing a minimal role. There ensued a genre of “country songs” that weren’t really country that persists to this day. Don Law, who produced Ray Price, was my hero back then, because he kept it country, with a lot of steel and fiddle. So quit complaining. That music is still available, along with all the authentic music being recorded in Texas, by Jake Hooker, Bobby Flores, Amber Digby and many others. So all is not lost; dig it, buy their albums, go see them. You don’t have to listen to Rascal Flatts or Taylor Swift.

Seriously, this guy is one of the premier E9th players ever. He played steel with Faron before I did, and he was known to stay up all night on long bus trips, working on his guitar. He might have some parts left over the next day, but he’d be ready for the gig that night. Here he is with Kimberly Murray. The way he releases some of the pedals so slowly is impeccable. 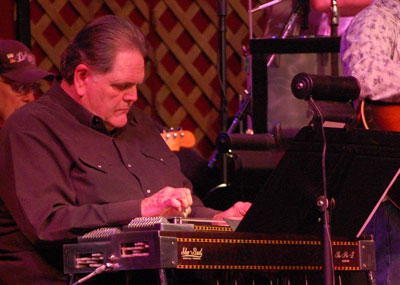