To celebrate, we’ve been doing a jazz version of “Haunted House”, by Gene Simmons, with an extra bar.

To celebrate, we’ve been doing a jazz version of “Haunted House”, by Gene Simmons, with an extra bar. To wit:
I just moved in my new haunted house today
Movin’ was hard but I finally got squared away… 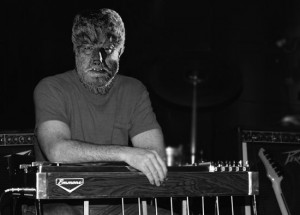 It’s all about the singers.

It’s all about the singers.
Are you happy with that tone?
Hell, he’s the club owner. We have to let him sing.
Hey, you on the steel! That ain’t the way Buddy played it.
You got another cord?
We know a couple thousand songs, but not that one. Ya got charts? No? Then do one we know or bring your own fucking band.
Um, well, let me see… Shit, can you kick it off?
Yep, we know that song. Tip jar’s right over there; an unpaid request is merely a suggestion.
Are you sure you wanna do this in “A”?
Gimme an “E”.
OK, motherfucker, we’ll settle this on the break.
Tell ‘em it’s time to buy the band a round.
Can I borrow your tuner? Mine’s DOA.
Hey, man, I saw her first.
I really liked what you were trying to play.
If you’d called me for the session I’d know your damn song.
It was in time when we started.

When I started playing steel guitar I weighed only about 140 pounds and I could barely lug my D-10 into a club.

When I started playing steel guitar I weighed only about 140 pounds and I could barely lug my D-10 into a club. I’m 38 years older and 47 pounds heavier now and it’s still a job, but at least I can still do it without having a heart attack or throwing my back out. The secret? I’ve worked out all these years, kept in shape. But… it’s not that simple. Hell, you can always find a gym, but you don’t come across these special picking-finger dumbbells just anywhere. 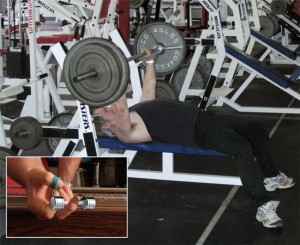 I was sitting at a steel guitar practicing paradiddles and watching the Phillies and the Giants and noticed something odd. Right handed batters wear a batting helmet with an ear flap over the left ear, and left handed batters have a flap over the right ear. Makes perfect sense, until they get on base, wearing the same helmet. Then the runner with the ear flap over his left ear has some added protection, because he could get hit in the left side of the head, which is facing the infield, by a batted ball or a thrown ball if he tries to steal second, third or score a run. The left handed batter’s unprotected ear is hanging right out there, exposed to all manner of injuries while he’s running the bases. They take off their batting gloves and shin protectors and adjust their testicles when they get on base, so why not change helmets, too?

Andy: What would you do if they asked you to play A cappella, Barn?

Andy: What would you do if they asked you to play A cappella, Barn?
Barney: Well, I’d play it, that’s what I’d do, on that steel guitar I got up there in Burlington, probably on the E9th neck.

Some people will tell you Nashville’s a rough town for a musician to make a living in, that producers and booking agents will stiff you, that club owners won’t pay you what you’re worth, that other musicians will undercut you behind your back, that tourists from Canada won’t tip… And so on. Well, you could hear the same tale of woe in New York or Los Angeles. It’s almost like it’s just human nature, don’tcha think, that shit happens, whether you’re a musician or a TV preacher or a contractor?

When I got to Nashville in the 70’s I started working right away, because I was a nice guy and a half-way decent player. I was no Will Rogers or Buddy Emmons, but I had enough going for me that I always had a gig. Don’t think I got rich and had two houses on Old Hickory Lake and a boat, but I made a living doing what I liked, and that was enough for me.

Until I got into my 40’s, that is, and decided that it might be time to get a real job – I’d never really had one. Hell, I was getting tired of long bus rides and truck stops and I missed my recliner and my own bed. There were also issues with no paid holidays and no health insurance, and country music had taken an ugly turn. But I’d never networked like I should have, I’d never tried to establish myself as a session player, I couldn’t write hit songs and I wasn’t interested in the “business” part of the “music business”.

So I went back to school and learned how to Photoshop and to write HTML and make web sites. How cool, I thought! So, with all these new job skills my future was certainly assured, right? Wrong, Kemo Sabe.

I “retired” from music, turning down gigs with Johnny Paycheck, the Flying Burrito Brothers and Royal Wade Kimes, and went through three office jobs with minimal success – it ain’t easy changing personalities from “musician” to “Dilbert” – and now I’m still playing steel guitar, and doing the web site thing at home on a freelance basis. (If you need one see me at Caligraphics.) “Don’t quit your day job” isn’t always the sagest advice. And I’m damn glad I didn’t always get paid what I was worth.

If you can play well enough to play gigs with a band, then you can play steel guitar a whole lot better than most singers can sing

When I went to work with Little Jimmy Dickens in the late 70’s he told me to watch him like a hawk, and to follow him wherever he went in a song, because he was liable to go anywhere, changing the arrangement, stopping the song to tell a joke, giving someone a solo, or just anything that occurred to him that might spice up the show. It was my job to make him and the song sound as good as I could. That was excellent advice for a young steel guitar player, and I’ve applied that work ethic to all reasonable playing situations I’ve been in ever since.

During my ten years with Faron Young I had to be even more attentive to his antics on stage, because he was a lot more inventive than Tater, and some songs would come to a fork in the road and I didn’t want to be stuck on the Slauson Cutoff.

Most people can’t sing very well, certainly not on a level with Tater and Faron, but a lot of them want to get up on stage with you at casual gigs and do it anyway, jumping time and forgetting lyrics. This bothers some musicians, who consider it beneath their musical dignity to back up no-talent wannabees, but, hell, they pay the cover charge and run a tab and bring in their friends, and all that keeps you working. Once in a while some asshole will fuck up a song and blame it on the band – and I’ve seen artists with hit records do this – but they’re usually very appreciative and might buy you a drink or use you on a custom session that some shady producer has talked them into.

The trade-off is that amateur singers might run off some regular customers who came in just to hear you play “Steel Guitar Rag”, but how can you deny a hairdresser from Omaha, whose life-long dream was to sing in Nashville, who saved her money for a vacation to Music City and who wants to get up at Robert’s and mangle “Stand By Your Man” while her husband snaps pictures with the new Nikon they bought especially for their big Nashville excursion?

If you can play well enough to play gigs with a band, then you can play steel guitar a whole lot better than most singers can sing, and I wouldn’t worry about your rep being besmirched because someone heard you backing up someone who can’t perform on the same level as you.

Do you need to be egotistical to play steel guitar?

A well known steel guitar player was seen driving through Hendersonville towing a big trailer. Some musicians he passed were speculating about what he might be hauling around, and one said, “His ego?”

Another well know player once made the comment that he had one more Emmons lick to cop and then he’d have them all.

Do you need to be egotistical to play steel guitar? Well, you need an ego, which is basically an awareness of yourself and the way you react to the world around you, and you need to feel that you’re competent enough to play a hard-to-manage-instrument with (hopefully) good musicians in front of an audience. You need to play assertively, with authority, and that takes confidence in your abilities. Steel players are often perceived as boring to watch (you don’t see people playing air steel on the dance floor), so it helps to play with some personality and a little flair, with an interesting stage presence, and if you can pull that off without appearing to be a maniacal egotist then that’s a good thing.

People have been accidentally calling me Cal Smith ever since I’ve lived in Nashville, and I lived there for over thirty years. Even people who’d known me for years and who knew very well what my last name is.

I was at the Union picking up my Opry check once and happened to catch Cal’s drummer with my check.

Well, Sharp is my real name; Smith is a stage name.

if you engage both the inside knee levers at the same time, like if your LKR lowers the E’s and the RKL lowers the 6th, you can put a hurt on the boys, especially if you’re wearing tight jeans, so approach this change with circumspection.