I had the hots for a Harley Davidson motorcycle back in the early 80’s. 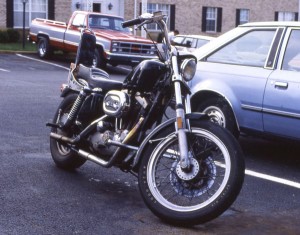 I had the hots for a Harley Davidson motorcycle back in the early 80’s. I’d owned a Triumph and a BSA when I was younger and I’d always wanted a Harley. But where was the money going to come from? I was just a lowly sideman, a Country Deputy living from johnny paycheck to johnny paycheck. Turned out not be a problem. Faron noticed the “Easy Rider” magazines cluttering up the bus and offered to finance my dream, so I met him at Commerce Union Bank, the downtown branch, in Nashville one afternoon and he loaned me a pile of loot. The tellers were all agog when he walked in. They all knew him, and banking business came to a screeching halt for a few minutes while he kibitzed with them and signed autographs. He withdrew my mad money, and I went out and got an old used Sportster with a gas leak that burned up a few months later in the parking lot at the Stockyards when I was out riding with a drummer friend, Don Andrews. Heh, the fire department had to come out to squelch the conflagration, which rose about 30 feet in the air, and I was known as “Blaze” for a while after that. It was fun while lasted, though. But, Faron, what a guy, huh?

2 thoughts on “Faron buys me a Harley”