“Can you think of a dead steel guitar player?” one of us asked.

It was a dark and stormy night and I was on a long road trip with Faron, and RIchard and I were the last ones still up, drinking one more beer (apiece) and discussing life in general.

“Can you think of a dead steel guitar player?” one of us asked. “I mean a famous one, a well-known one, who worked with big artists and was on some hit records?”

Another swallow of beer, and the other one of us said, “Hmm, no.”

We considered that for a few moments as the dark Texas landscape whizzed by at 70mph. Oh, wait, the bus was going 70mph. Neither one of us could think of a dead steel guitar player.

Pete Drake died not too long after that, in 1988, and AFAWK he was the first one to go to the big recording studio in the sky. Jimmy Day went in 1999 and Jimmy Crawford in 2005. You can look up other dead musicians here.

Some not so well known steel guitar players, guys that I hung around with in Nashville and traded licks with, died some time after that late-night bus conversation. 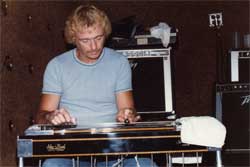 Chuck Bartlett was a fine player, from Ohio, who worked with John Conlee and Kitty Wells and who played every club in Nashville at one time or another, night after night, when he wasn’t on the road. He had a beautiful Sho~Bud that I sat in on many times. I followed him on the Red Sovine gig. Cancer got him.

I met Wayne Kincaid at a club on Lower Broad in 1972 when I bought my first steel guitar at the Sho~Bud store. I’d hang out in Merchant’s and watch him play, and on the breaks I’d bug him, asking what this or that knee lever did or something. He was an old West Virginia coal miner, and a crotchety bastard whom everybody didn’t get along with, but we were great friends. He minded my drink for me one time at Gabe’s when I had to go knock some smart-ass out the door. He was at Gabe’s for many years, and toward the end the cancer was really getting to him and he’d call me at the last minute some nights to sub for him when the pain was too bad. I went to his funeral, in Fairview, where Billy Walker presided over the proceedings from the pulpit and LaDonna Capps sang, and I inherited his gig at Gabe’s. 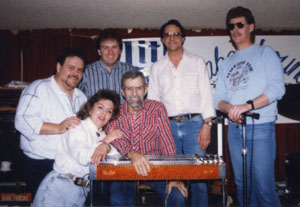 There’s been a bunch of other pickers pass on since I’ve been in town. Guys I’ve worked with, roomed on the road with, learned music from, drank with, loaned money to… If you have a musician friend, cherish him or her. At 2AM after the gig when you’re packing up your axe you never can be sure that you’ll ever pick together again.